A Nakiri knife is a traditional Japanese vegetable knife. In Japan vegetable knives are known as Nakiri (double-sided grind) or Usuba (one-sided grind). You can recognize a Nakiri by its rectangular blade. The tip of the knife is slightly rounded to make sure you can also quickly cut vegetables from an angle. This is, without a doubt, the knife you use to finely cut carrots, cucumber, cabbage and any other types of vegetables. But also finely cutting herbs is a piece of cake. Nakiri knives are becoming more and more popular. This isn't that surprising. Today we spend a lot of time on being healthy and, as such, on cutting a whole lot of vegetables!

The blade on a Nakiri

A Nakiri knife is characterized by its straight blade that enables you to use the entire cutting surface. The edge is wafer-thin and razor-sharp. With it you can finely and precisely dice an union. In general nakiri's have a double-sided grind which makes the knife great for both left and right-handed use. There are, however, exceptions so pay close attention whether you are dealing with a single or double-edge grind when purchasing a nakiri.

How do you use a nakiri knife?

Never mistake nakiri knives for cleavers. Cleavers have a much thicker blade and are therefore more suited to finely chop vegetables, herbs and even bones. The steel of the nakiri knife is much thinner which means that chopping could seriously damage the blade.

Other than with santoku's it is not possible to make a rolling movement with a nakiri knife. A nakiri doesn't 'rock' on the surface but moves diagonally from back-top to front-down. The knife always stays in the same horizontal position and the tip will not rest on the cutting board.

If you put your nakiri knife in a drawer you run the risk of it touching other steel objects. This is not recommended for the sharpness of your knife. Also, grabbing in a drawer that holds sharp kitchen knives isn't very safe. That is why you should use knife guards, a drawer insert or, even better, a good knife magnet or knife block. 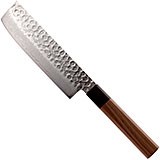 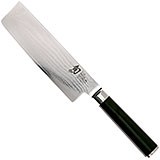 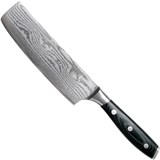 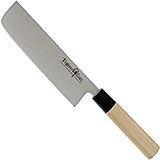 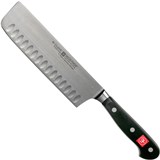